A little over two years ago, Coco Scott turned in her day job at Porsche for a home recording studio and a whole new way of life on a warm, secluded beach where she began her own music career from scratch. Over the span of 8 months, she wrote, arranged, produced, recorded, and published each of her own demos for a whole album. She also taught herself to play the piano while she was doing it! There isn’t anything she can’t do if she puts her mind to it.

Smolder, Coco’s debut album, was recorded to analog tape and DSD256 by 5-time Grammy nominee and Blue Coast Records founder, CEO, sound engineer, and producer, Cookie Marenco in San Francisco. Coco and Cookie (and team) recorded and mixed the entire album in 6 consecutive days–something that had never been done at Blue Coast Records before. It took the perfect combination of talents and recording perfection to pull it off, and the album is gorgeous! In fact, after only three months of sales, Smolder was named the #5 Top Selling Album in 2017 at Blue Coast Music. Not only that, but Andreas Koch from Playback Designs used her album to demonstrate his new DREAM DAC line at the 2018 Axpona audio show in Chicago and the High-End Audio Show in Munich!

Coco is a force with which to be reckoned having overcome massive odds to chase her dream of being a musician. Among other difficult circumstances, she grew up with an abusive father and later found herself in a toxic relationship with someone who would later become her stalker. Those experiences fueled her desire for success even more than she had innately and are tucked away in her musical inspiration arsenal.

Coco shares these personal stories and the inspiration behind her music in her monthly mini magazine. Sign up for it on her website at www.cocoscottmusic.com

What’s next? Only Coco knows, but we suspect another album is around the corner for this artist!

TZelement MAG: What made you decide you wanted to become a singer and songwriter, was there a pivotal moment?
Coco: I’m not sure there was any ‘moment’ in which I knew it was what I wanted, I just knew that there was something inside of me that could only come out through music. I felt its power and vigor, and it’s the one thing that keeps me up at night. The thing I have to do. I can’t explain it, I just have to do it … For me, for future listeners, for humanity. I don’t know, but it’s a force within that is ready to come out.

TZelement MAG: What makes your musical style unique?
Coco: My musical style is unique because I am not afraid of doing a solo piano piece right after a synth-style pop song. And though my voice sounds a little like Sarah McLachlan, Enya, Dido, and Norah Jones, it isn’t any of those exclusively. That in itself makes it unique. It’s both breathy and sultry at the same time.

TZelement MAG: Our magazine is all about POSITIVITY. What positive message would you share with someone who’s struggling with low self-esteem?
Coco: Greatness is already in you. Don’t stop looking for it. Work on yourself more than you work on others. Always be willing to learn from your mistakes and from the mistakes of others. Every lesson in life has a tuition; the key is to not pay the same tuition more than once. If you’re stuck, you just don’t know all your options. Dream, dream, dream.

Coco’s music is available for purchase at: 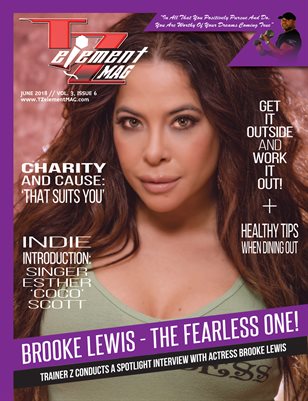 Our June 2018 magazine is available in Print and Digital Download and features an in-depth Spotlight Interview with Awesome Actress Brooke Lewis – The Fearless One! Plus fitness tips, learn about the charitable cause of ‘That Suits You’, and an Indie Introduction for Singer Coco Scott.

Hello to each and everyone! This is the primary news reporting and posting account for 'the TZ element'. Please feel free to submit your POSITIVE content (articles, news stories, photos, music tracks, video clips, press releases) for possible inclusion in our magazine. Email your content to the following email address: News411@getthetzelement.com