The measure of greatness for a dedicated thespian – rests not in the presentation of awards, swanky red carpet events, or receiving a pat-on-the-back from one’s peers. Instead, it’s the ability to create connections that suspend reality while telling a story. More than anything else, it’s about having that…that—thing! It’s that certain ‘Je ne c’est quoi’ production companies often find bankable. And it’s also one of the key qualities for which ‘Gary A Wales’ is known and respected around the world (success).

As a highly motivated and tenacious Scottish Actor, it’s no surprise that Gary showed signs of promise early in his theatrical development (as early as age 6). After moving to County Armagh (Northern Ireland), his sense of timing and ability to deliver convincing performances were more than evident, and widely applauded by his social circle and theatrical pedagogues. Gary established himself through the pathway of community theatre, as a way of settling into what he would later offer the world (his drive for betterment, and unique display of brilliance). As those around him could attest, the sense of commitment to his craft soon gave rise to his involvement in local stage productions, TV programmes, shorts, films and commercial work; once again, attaching his love for his craft to his vision for success.

With professional credits that include: BBC, BFI and HBO, Gary’s early Performing Arts training at Southern Regional College has proven more valuable than anyone could have imagined (except the visionary himself). In 2016, he launched his clothing line – ‘GAW Clothing’ (specializing in Male & Female apparel), followed by the launch of his production company ‘GAW Films’, 2017. To give you more of an up-close look at this actor, producer and business man – we share a partial tweet dated August 5, 2018 (posted two months after his baptism at Journey Church – Norman, OK), that makes a statement about ‘who’ Gary is, and ‘what’ drives him to greatness … “I am who I am; I am what I am; I do what I do, and I ain’t never gonna do it any different…” At age 23, it seems he has it all; but, truth be told—he’s just getting warmed up! He’s young, talented, focused and incredibly driven; so, the question becomes … where does ‘Gary A Wales’ go from here? Well, as his story goes, he’s busy plotting the coordinates for a sail straight to the top. With the promise of ‘love’ and ‘good will’ woven into his personal brand, God standing by his side, and veins flooded with raw ambition – Gary A Wales is proving the sky is the limit to what he can have.

TZelement MAG: What’s the 1 word you would use to describe yourself, and why?
Gary: CARING. I care about others all the time and I do everything I can to make sure that others are safe and loved.

TZelement MAG: If you were granted the authority to change 3 things in the world, what would they be?
Gary:
1. I would put an end to bullying. There is so much of it in this world (including online).
2. World hate. There is so much hate and people need to get along with each other more!
3. Equal Rights. Everyone deserves to have an equal chance to ‘do’ and ‘be’ what they wish. It doesn’t matter what colour or religion you are, we should have the ‘same’ rights.

TZelement MAG: What positive message could you share with those struggling with low self-esteem and/or social acceptance?
Gary: Love yourself no matter what! When there is a will, there is a way. 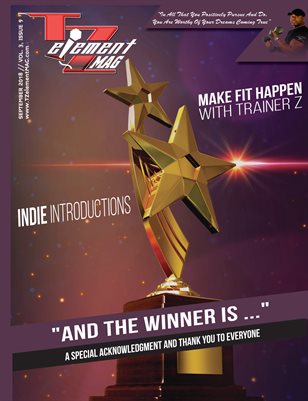 Our September 2018 printed and digital download magazine is available for purchase. This magazine issue honors each and every one of you! We also present to you; 4 Indie Introductions (2 singers, 1 author, 1 actor) — Get to know these rising stars. Also; Make FIT Happen with Trainer Z!

Hello to each and everyone! This is the primary news reporting and posting account for 'the TZ element'. Please feel free to submit your POSITIVE content (articles, news stories, photos, music tracks, video clips, press releases) for possible inclusion in our magazine. Email your content to the following email address: News411@getthetzelement.com 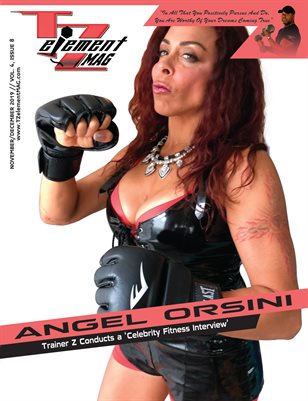 Terrible T and The Stylistics